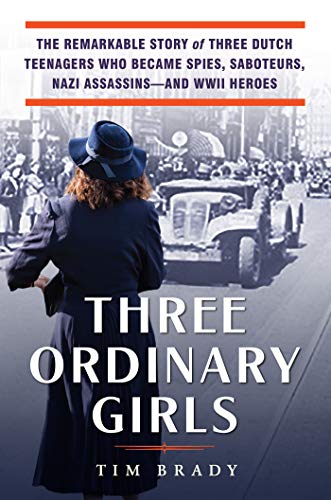 Tim Brady is an award-winning history author who’s critically acclaimed books include Twelve Desperate Miles, A Death in San Pietro, His Father’s Son and Three Ordinary Girls. In addition to contributing numerous articles, reviews, essays and short stories for a wide range of magazines, newspapers and journals, he has written and helped develop a number of television documentaries, including the Peabody Award-winning series, Liberty! The American Revolution for PBS. He lives in St. Paul, Minnesota, and is a graduate of the Iowa Writers' Workshop.

An astonishing World War II story of a trio of fearless female resisters whose youth and innocence belied their extraordinary daring in the Nazi-occupied Netherlands. It also made them the underground’s most invaluable commodity.
May 10, 1940. The Netherlands was swarming with Third Reich troops. In seven days it’s entirely occupied by Nazi Germany. Joining a small resistance cell in the Dutch city of Haarlem were three teenage girls: Hannie Schaft, and sisters Truus and Freddie Oversteegen who would soon band together to form a singular female underground squad.
Smart, fiercely political, devoted solely to the cause, and “with nothing to lose but their own lives,” Hannie, Truus, and Freddie took terrifying direct action against Nazi targets. That included sheltering fleeing Jews, political dissidents, and Dutch resisters. They sabotaged bridges and railways, and donned disguises to lead children from probable internment in concentration camps to safehouses. They covertly transported weapons and set military facilities ablaze. And they carried out the assassinations of German soldiers and traitors–on public streets and in private traps–with the courage of veteran guerilla fighters and the cunning of seasoned spies.
In telling this true story through the lens of a fearlessly unique trio of freedom fighters, Tim Brady offers a fascinating perspective of the Dutch resistance during the war. Of lives under threat; of how these courageous young women became involved in the underground; and of how their dedication evolved into dangerous, life-threatening missions on behalf of Dutch patriots–regardless of the consequences.
Harrowing, emotional, and unforgettable, Three Ordinary Girls finally moves these three icons of resistance into the deserved forefront of world history.

This Recommended Reading and discussion guide is shared and sponsored in partnership with Kensington.

Many women served in the underground resistance during WWII. What makes the stories of Truus, Freddie, and Hannie so remarkable?

Hannie Schaft’s background was very different from that of Truus and Freddie Oversteegen, but the three joined forces despite their differences. What were the events that drew them together?

Truus, Freddie, and Hannie came of age during a tumultuous moment in 1930s Europe. How did life in their medieval village of Haarlem change after the commander of The Dutch Royal Army surrendered to the Nazis and nine million Netherlanders were suddenly under the heel of the German boot?

“A dramatic group portrait of three teenage girls who fought in the Dutch resistance movement during WWII. Brady conveys the inhumanity of the period with precision…. This moving story spotlights the extraordinary heroism of everyday people during the war and the Holocaust.” – Publishers Weekly

“Relying heavily on Truus’ own observations, as well as previous works about Hannie’s life, this book will please Brady’s fans as well as those who are interested in new and different stories of WWII.” – Booklist

“Brady paints a compelling picture of the fear, tragedy and paranoia of living in an enemy-occupied land. Heroism and betrayal exist side by side; mistakes are made in the fog of war.” - Minneapolis Star-Tribune