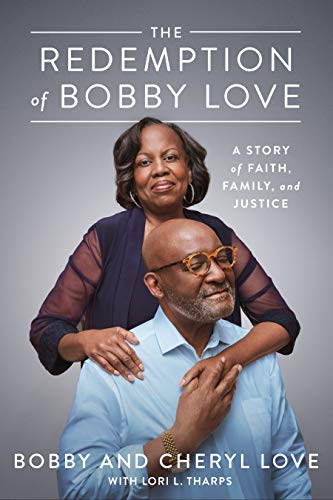 The Redemption of Bobby Love: A Story of Faith, Family, and Justice

Bobby and Cheryl Love were living in Brooklyn, happily married for decades, when the FBI and NYPD appeared at their door and demanded to know from Bobby, in front of his shocked wife and children: “What is your name? No, what’s your real name?”

Bobby’s thirty-eight-year secret was out. As a Black child in the Jim Crow South, Bobby found himself in legal trouble before his 14th birthday. Sparked by the desperation he felt in the face of limited options and the pull of the streets, Bobby became a master thief. He soon found himself facing a thirty-year prison sentence. But Bobby was smarter than his jailers. He escaped, fled to New York, changed his name, and started a new life as “Bobby Love.” During that time, he worked multiple jobs to support his wife and their growing family, coached Little League, attended church, took his kids to Disneyland, and led an otherwise normal life. Then it all came crashing down.

With the drama of a jailbreak story and the incredible tension of a life lived in hiding, The Redemption of Bobby Love is an unbelievable but true account of building a life from scratch, the pain of festering secrets in marriage, and the unbreakable bonds of faith and love that keep a family together.

This discussion guide and book of the month was shared and sponsored in partnership with Mariner Books.

Why do you think the authors chose to open the story with Cheryl’s perspective of Bobby’s arrest more than forty years after his prison break? What fears does Cheryl say that she had when the FBI and police invaded her home? Despite this, what did Cheryl’s instincts tell her to do? Were you surprised by her reaction to Bobby’s arrest? Why or why not? Why does Cheryl say that she felt a sense of relief on this day?
When we first hear from Bobby as narrator, what stunning statements does he tell readers the police made to him following his arrest? Why did the police decide to pursue the case even though the crimes were committed so long ago, and they knew that Bobby was now an upstanding citizen? When Bobby arrives at Rikers Island and is alone in his cell for the first time, what question does he ask himself? How does the book answer this question?
What were the childhoods of Cheryl and Bobby like? What did they have in common? When Bobby thinks back on his childhood, what is “all [he] remembers about that time” (24)? What lessons does it seem like Cheryl and Bobby learned during this time and how did these experiences ultimately shape or influence the people they became?

“The Redemption of Bobby Love is the perfect title for a story that explores both redemption and love with such vital, fulsome heart. At once tender and brutal, the Love family’s journey explores parenthood, marriage, the penal system, and the human condition of sustaining hope in the center of the storm. The systems that govern our most vulnerable are larger than one family, and yet this family’s story encompasses those systems with a power that will shake you.” — Jeff Hobbs, author of The Short and Tragic Life of Robert Peace

"In this moving story of struggle and forgiveness, an escaped convict reflects on his life in hiding alongside his wife of 35-plus years...In parallel narratives from Bobby and Cheryl, those secrets are disclosed against the history of their unshakable love...Readers will be awestruck by this inspiring account." — Publishers Weekly

“A rumination on the justice system and the way that it can work in inequitable ways…. Coauthored in an alternating storyline by Bobby and his wife, Cheryl, the book sees the Loves rewind their love story and dissect Bobby’s ‘roadmap to destruction.’ … Bobby writes honestly about his own self-reflection, the realities of growing up in North Carolina during Jim Crow, and the impact that incarceration had on his early life.” —Booklist

"A warmhearted story of an ex-con’s long and winding road to an honest life." —Kirkus Reviews