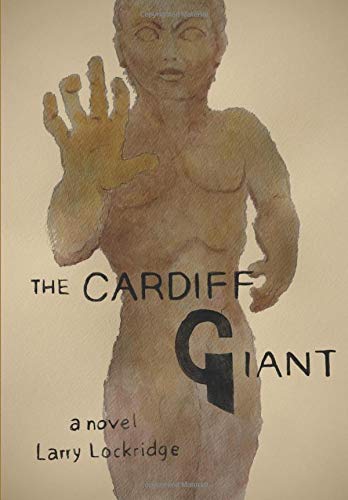 The Cardiff Giant, set in Cooperstown, New York, has up its novelistic sleeve Puck's profound declaration, "Lord, what fools these mortals be!" Jack Thrasher, investigative reporter, arrives on the scene to look into the weird disappearance from the Farmers' Museum of a huge human figure. He had been unearthed in the late nineteenth century near Cardiff, New York. Jack confronts locals and outsiders who all have a theory, including that the giant has been reanimated and is lurching throughout the community. They are enmeshed in self-punishing belief systems such as alien abduction, astrology, kabbalistic numerology, New Age rebirthing, and religious dogmas reduced to literal absurdities. The fast-paced action centers around episodes where they pay a sorry price for their beliefs. But skeptics don't fare much better, susceptible as they are to mental disorders that show the faculty of reason is fragile indeed. These characters group and regroup, with romance always on their minds, and finally come to recognitions at once surprising and moving.

This Indie Author Corner and discussion guide was shared and sponsored in partnership with Dartfrog Books.

"The Cardiff Giant" treats human gullibility in a light-hearted and satirical way but still attempts to position it as a serious ethical question confronting all of us. Do you yourself subscribe to any belief systems that are dubious or worth examining more closely? If so, what appeals about them?

The pivotal character turns out to be less the narrator Jack Thrasher than Thor Ohnstad. How does the author gradually build the character of Ohnstad? What do you make of his great confession near the end at Hyde Hall?

Skepticism or objective reasoning might seem to be the remedy for dubious and self-punishing belief systems, but how does skepticism fare in "The Cardiff Giant"? What does the novel imply about the faculty of reason's power alone to maintain sanity?