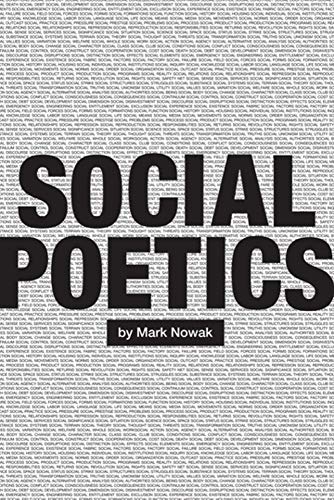 Mark Nowak’s books include Shut Up Shut Down (a New York Times “Editor’s Choice”), Coal Mountain Elementary (which Howard Zinn called “a stunning educational tool”), and Social Poetics, all from Coffee House Press. He is currently editing a revised and expanded edition of writings from the Attica poetry workshops of Celes Tisdale (1972-1974). A native of Buffalo, Nowak is the founding director of the Worker Writers School at PEN America in New York City and a professor of English at Manhattanville College.

Social Poetics documents the imaginative militancy and emergent solidarities of a new, insurgent working class poetry community rising up across the globe. Part autobiography, part literary criticism, part Marxist theory, Social Poetics presents a people’s history of the poetry workshop from the founding director of the Worker Writers School. Nowak illustrates not just what poetry means, but what it does to and for people outside traditional literary spaces, from taxi drivers to street vendors, and other workers of the world.

This discussion guide was posted in partnership with the book's author, Mark Nowak.

Why did you begin Social Poetics with what you call “a people’s history” of the poetry workshop”?

One of the workshops you write about is the one at Attica prison after the uprising/rebellion in 1971. Why is this workshop important to you?

Can you tell us about the Worker Writers School that you founded, now in its 10th year in collaboration with PEN America?