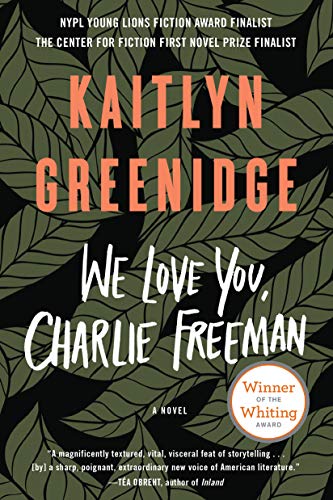 Kaitlyn Greenidge's debut novel, We Love You, Charlie Freeman, was one of the New York Times Critics’ Top 10 Books of 2016 and a finalist for the Center for Fiction First Novel Prize. She is a contributing writer for the New York Times, and her writing has also appeared in Vogue, Glamour, the Wall Street Journal, and elsewhere. She is the recipient of fellowships from the Whiting Foundation, the National Endowment for the Arts, and the Radcliffe Institute for Advanced Study. Her highly anticipated next novel, Libertie, will be available March 30, 2021.

The Freeman family--Charles, Laurel, and their daughters, teenage Charlotte and nine-year-old Callie--have been invited to the Toneybee Institute to participate in a research experiment. They will live in an apartment on campus with Charlie, a young chimp abandoned by his mother. The Freemans were selected because they know sign language; they are supposed to teach it to Charlie and welcome him as a member of their family. But when Charlotte discovers the truth about the institute’s history of questionable studies, the secrets of the past invade the present in devious ways.
The power of this shattering novel resides in Greenidge’s undeniable storytelling talents. What appears to be a story of mothers and daughters, of sisterhood put to the test, of adolescent love and grown-up misconduct, and of history’s long reach, becomes a provocative and compelling exploration of America’s failure to find a language to talk about race.

Language, both how we use it and how it fails us, is an important theme in this book. Laurel learns to sign largely because of how she’s treated when she speaks. Can you think of a moment in your life when you felt hindered by language? How did you overcome this?

Laurel does things that many consider shocking, from moving the family to the Toneybee Institute to allowing Charlie to attempt to breastfeed. What did you think of Laurel’s actions? What insights into her character did they provide?

We Love You, Charlie Freeman: A Novel

A FINALIST FOR THE 2016 CENTER FOR FICTION FIRST NOVEL PRIZE AND THE 2017 YOUNG LIONS AWARD“Smart, timely and powerful . . . A rich examination of America’s treatment of race, and the ways we attempt to discuss and confront it today.” —The Huffington Post
“A magnificently textured, vital, visceral feat of storytelling . . . [by] a sharp, poignant, extraordinary new voice of American literature.” —Téa Obreht, author of The Tiger’s Wife

“Terrifically auspicious . . . Ms. Greenidge has charted an ambitious course for a book that begins so mock-innocently. And she lets the suspicion and outrage mount as the Freemans’ true situation unfolds. This author is also a historian, and she makes the '1929' on Toneybee plaque tell another, equally gripping story that strongly parallels the Freemans’ 1990 experience.” —Janet Maslin, The New York Times
“…witty and provocative… Greenidge deftly handles a host of complex themes and characters, exploring not just how (literally) institutionalized racism is, but the difficulty of an effective response to it. … Greenidge doesn’t march to a pat answer; the power of the book is in her understanding of how clarity wriggles out of reach. For all the seriousness of its themes, though, Charlie Freeman is also caustically funny.” —USA Today