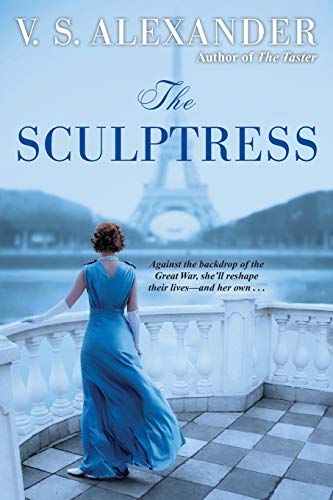 Acclaimed author V.S. Alexander has a gift for casting a hopeful light into dark periods of recent history through the lives of complex and remarkable female characters. He’s undertaken the Irish Potato Famine in The Irishman’s Daughter, the courageous WWII resistance movement of young Germans against the Nazi regime in The Traitor, the unjust institutions of Magdalen laundries in The Magdalen Girls, and the experiences of a woman hired as Hitler’s food taster in The Taster. Now in The Sculptress, he explores the unlikely intersection of art and WWI, as a talented female sculptor uses her gift to create realistic masks for soldiers whose faces have been disfigured in battle.

May 1917: The elegant streets of Boston are thousands of miles away from the carnage of the Western Front. Yet even here, amid the clatter of horse-drawn carriages and automobiles, it is impossible to ignore the war raging across Europe. Emma Lewis Swan’s husband, Tom, has gone to France, eager to do his duty as a surgeon. Emma, a sculptress, has stayed behind, pursuing her art despite being dismissed by male critics. On the bustling sidewalk she spies a returned soldier. His brutally scarred face inspires first pity, and then something more—a determination to use her skill to make masks for disfigured soldiers.

Leaving Boston for France also means leaving behind Linton Bower, a fiery, gifted artist determined to win her. Emma’s union with Tom has been steady yet passionless, marred by guilt over a choice she made long ago. In Paris, she crafts intricate, lifelike masks to restore these wounded men to the world. But in the course of her new career she will encounter one man who compels her to confront the secret she’s never revealed, not even to Tom. Only by casting off the façade she has worn for so long can she pursue a path through heartbreak and turmoil toward her own unexpected future…

This recommended reading and discussion guide is shared and sponsored in partnership with Kensington.

The inspiration for The Sculptress came from Flaubert’s novel Madame Bovary. Do you see parallels between the two books? If so, what are they?

Emma from Madame Bovary and Emma from The Sculptress have two decidedly different character endings. Do you believe this was because societal roles for women had softened from 1856 (Bovary’s publication date) to World War I?

Are the issues that Emma struggled with in the book still prevalent today?

“The novel is thoroughly researched, drawing readers fully into the saga with descriptive, often graphic details and strong characterizations. For fans of World War I historical fiction.”- Library Journal on The Sculptress

“In this powerful historical saga, Alexander explores how Ireland’s Great Potato Famine of 1845 changes lives forever, and how love can blossom against even the greatest of odds…Alexander’s research lends unquestionable weight to the story…Accompanied by an expertly rendered plot, bold and empathetic characters, and prose the jumps off the page, this tale will particularly satisfy fans of historicals and those looking for stories about the redeeming grace of faith and hard work.” —Publishers Weekly, STARRED REVIEW for The Irishman's Daughter

“Alexander immerses readers in 1840s Ireland with characteristic expertise, blending fact with fiction in this compelling and engrossing novel. Fans of Lucinda Riley and Paulette Jiles will appreciate Alexander's eye for detail and keen sense of place, which allow the blighted fields and family homestead to loom large. The Irishman's Daughter skillfully blends family ties with the horrors of a starving country and the hopefulness of young love.” —Booklist

“The Irishman’s Daughter lets readers peer through a historical telescope to better understand the impact of class divisions in 19th century Ireland and the resulting desperate fight for survival…This gripping story thrusts us into the hearts of a family who risks everything to help their fellow Irishmen survive the devastation of The Great Hunger. Written with hope for a better tomorrow, V. S. Alexander gives readers an intimate heart-wrenching account of the unimaginable suffering of those who clawed their way through Ireland’s darkest years.” —Booktrib

"An unusual novel… this author has a magnificent eye for detail.” —Florida Weekly on The Magdalen Girls