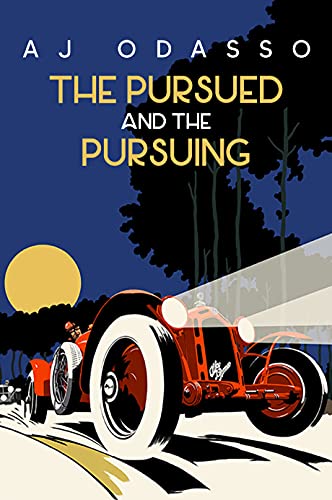 The Pursued and the Pursuing

F. Scott Fitzgerald's The Great Gatsby ends after Jay Gatsby is shot and killed for a hit and run that he did not commit, as well as for his attempts to recapture the past. However, while the bullet's aim is still true, The Pursued and the Pursuing explores what might have been had it left Gatsby with another chance at happiness. Find it he does, although not in the arms of Daisy Buchanan. As Gatsby travels the world with Nick Carraway, his friend and narrator, he sheds wealth, performance, and glamor in favor of honesty, intimacy, and love.

When Daisy writes to Nick a decade after Gatsby's brush with death, her frenzied reentrance into their lives threatens to stir up old grudges and longings, but the biggest surprise she brings is her daughter. At thirteen, Pam Buchanan is a queer, bookish girl who feels out of place as her parents try to steer her toward their standards of normalcy. Fortunately, Nick and Gatsby are more than familiar with the perils of being molded by others' expectations.

A tale of chosen family, queer love, and a glitzy party or two, The Pursued and the Pursuing reimagines Fitzgerald's beloved characters and celebrates those with courage to live in the present.

This discussion guide was shared and sponsored in partnership with Dartfrog Books.

This novel begins with a quote from Nick Carraway in The Great Gatsby: “There are only the pursued, the pursuing, the busy, and the tired.” What significance might this statement have in the context of Fitzgerald’s novel, as well as in this one by AJ Odasso? How does that meaning change, especially from Nick’s perspective, from one book to the other?
Is this novel successful as a queering (or queer reading) of the original elements found in TheGreat Gatsby? Give specific examples using character development, plot, and themes explored in both books.
Pam Buchanan, Daisy’s and Tom’s daughter, appears as a toddler in only a few brief scenes in The Great Gatsby (in which she is referred to only as “Pammy”). In The Pursued and the Pursuing, she is reintroduced as a teenager and young adult, and is one of the three protagonists—effectively making her an original character. How does her character development influence that of Nick and Jay now that she has more influence on the continuation of their story?