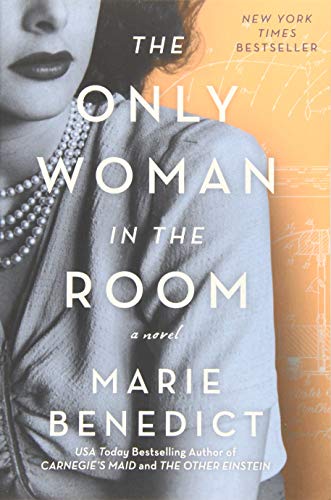 The Only Woman in the Room: A Novel is Bookclubz' Book of the Month.

The instant New York Times bestseller! She possessed a stunning beauty. She also possessed a stunning mind. Could the world handle both? Her beauty almost certainly saved her from the rising Nazi party and led to marriage with an Austrian arms dealer. Underestimated in everything else, she overheard the Third Reich’s plans while at her husband’s side, understanding more than anyone would guess. She devised a plan to flee in disguise from their castle, and the whirlwind escape landed her in Hollywood. She became Hedy Lamarr, screen star. But she kept a secret more shocking than her heritage or her marriage: she was a scientist. And she knew a few secrets about the enemy. She had an idea that might help the country fight the Nazis…if anyone would listen to her. A powerful novel based on the incredible true story of the glamour icon and scientist whose groundbreaking invention revolutionized modern communication, The Only Woman in the Room is a masterpiece.

The Only Woman in the Room opens in Austria at a pivotal time in the years leading up to World War II. How familiar were you with the events of this era, particularly the European political developments and the relationship of Austria with Italy, Germany, and its neighbors? Did you learn anything new about this period in history? Imagine you were Hedy at this time. What would you do in the face of the oncoming war?

The marriage between Hedy and the much-older munitions manufacturer Fritz Mandl is oftentimes disturbing. Did you find yourself becoming frustrated and angry by Fritz’s treatment of Hedy and her decision to stay in the marriage for so long? Would you have felt as bound to the promise to her father—that she will use Fritz as a shield and stay with him unless she has no choice—as she did? How did this sense of duty motivate her decisions and actions at this stage? What did you think about her mother’s views on the marital vow?

What are some of the differences between the life of Hedy the movie star and public figure and Hedy the scientist and private person? How does the theme of wearing masks appear throughout the novel? Do you feel this divide between women’s exterior and interior lives exists today?

The Only Woman in the Room: A Novel

This Book of the Month is sponsored in partnership with Sourcebooks, https://www.sourcebooks.com.