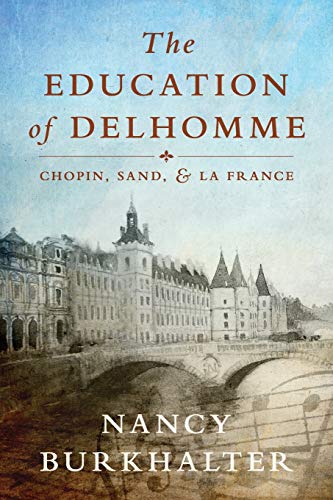 When Beaulieu Delhomme, a piano tuner, faces the guillotine for committing treason against the newly elected French president, the one person who could save him from this fate is his former arch-rival, the celebrated author, George Sand. The plot leading to his imprisonment revolves around the triangle of composer Frédéric Chopin, his lover George Sand, and Delhomme, Chopin's loyal piano tuner. Both Sand and Delhomme compete for the attention of Chopin, who fights a losing battle with tuberculosis. The president's spymaster uses this triangle to lure cash-strapped Delhomme into exploiting his friendship with Chopin to spy on George Sand, whose fiery rhetoric threatens the new president. The Education of Delhomme is a richly layered novel set in 19th century France.

1848 was a time of tremendous turmoil throughout Europe. Did you see any similarities between between the revolutionary themes encountered by Beaulieau Delhomme in the novel and the political and economic turmoil the world faces today?

In the novel, George Sand keeps a journal. Why do you think the author chose to include these journal entries? How do you feel about the way the author portrayed George Sand? Do you think this was an accurate portrayal of the famous writer? Why or why not?