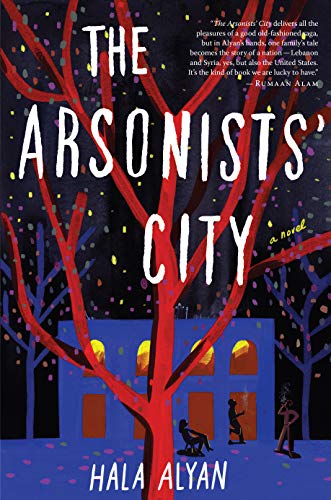 “The Arsonists’ City delivers all the pleasures of a good old-fashioned saga, but in Alyan’s hands, one family’s tale becomes the story of a nation—Lebanon and Syria, yes, but also the United States. It’s the kind of book we are lucky to have.”—Rumaan Alam

The Nasr family is spread across the globe—Beirut, Brooklyn, Austin, the California desert. A Syrian mother, a Lebanese father, and three American children: all have lived a life of migration. Still, they’ve always had their ancestral home in Beirut—a constant touchstone—and the complicated, messy family love that binds them. But following his father's recent death, Idris, the family's new patriarch, has decided to sell.

The decision brings the family to Beirut, where everyone unites against Idris in a fight to save the house. They all have secrets—lost loves, bitter jealousies, abandoned passions, deep-set shame—that distance has helped smother. But in a city smoldering with the legacy of war, an ongoing flow of refugees, religious tension, and political protest, those secrets ignite, imperiling the fragile ties that hold this family together.

In a novel teeming with wisdom, warmth, and characters born of remarkable human insight, award-winning author Hala Alyan shows us again that “fiction is often the best filter for the real world around us” (NPR).

This recommended reading and discussion guide has been shared and sponsored in partnership with HMHCO with questions created by Reading Group Choices.

Consider the author’s technique of opening the book with a death, and then having it return much later in the story. How does it illustrate the tenacity of the past, and its long-felt repercussions?

Compare the conversations of Ava in her Brooklyn social circle near the opening of the book to the conversations with, for example, Naj at the gallery opening in Beirut, or Tarek and Mazna during her theater rehearsals in Damascus. What differences and similarities exist between the interactions in terms of subject and how individuals express themselves?

Consider the various reasons why members of the Nasr family choose to live where they do. How does this relate more broadly to reasons why people are forced to leave their countries, or why they remain?

A Most Anticipated Title of 2021 from Buzzfeed, Refinery29, Lit Hub, The Millions, The Rumpus, Write or Die Tribe, and Palm Beach Daily News

Named a Most Anticipated Title by a Woman of Color for 2021 by R.O. Kwon in Electric Literature

“I didn’t think I could love The Arsonists’ City as much as Salt Houses, but I did. It was sharp, thought-provoking. I couldn’t put it down. Hala Alyan is a lyrical force, a much-needed Arab American voice.” —Etaf Rum, New York Times best-selling author of A Woman Is No Man

“I don’t exactly understand how Hala Alyan does it—conjures love, sorrow, betrayal, and joy; goes from being funny and warm to incisive and thoughtful—but as a reader, I’m glad that she does. The Arsonists’ City delivers all the pleasures of a good old-fashioned saga but in Alyan’s hands, one family’s tale becomes the story of a nation—Lebanon and Syria, yes, but also the United States. It’s the kind of book we are lucky to have.” —Rumaan Alam, author of Leave the World Behind

"A profound inquiry into what it means to be a family, determine your identity, and hold onto a home — particularly in a world that doesn't always weigh equally the importance of everyone's home, identity, and family...Alyan is virtuosic at portraying the complicated bonds that exist between family members, and she is unafraid to show both the beauty and the despair that come with true intimacy, love, and loss." —Refinery29