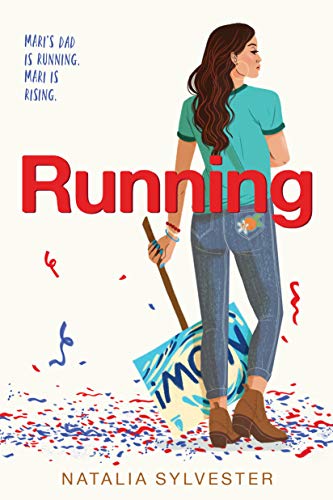 Natalia Sylvester is the author of two novels for adults, CHASING THE SUN and EVERYONE KNOWS YOU GO HOME, which won an International Latino Book Award. RUNNING, her debut novel for young adults, is a 2020 Junior Library Guild Selection. Born in Lima, Peru, Sylvester grew up in Florida and Texas and received a BFA in Creative Writing from the University of Miami.

When fifteen-year-old Cuban American Mariana Ruiz’s father runs for president, Mari starts to see him with new eyes. A novel about waking up and standing up, and what happens when you stop seeing your dad as your hero—while the whole country is watching.
In this thoughtful, authentic, humorous, and gorgeously written novel about privacy, waking up, and speaking up, Senator Anthony Ruiz is running for president. Throughout his successful political career he has always had his daughter’s vote, but a presidential campaign brings a whole new level of scrutiny to sheltered fifteen-year-old Mariana and the rest of her Cuban American family, from a 60 Minutes–style tour of their house to tabloids doctoring photos and inventing scandals. As tensions rise within the Ruiz family, Mari begins to learn about the details of her father’s political positions, and she realizes that her father is not the man she thought he was.
But how do you find your voice when everyone’s watching? When it means disagreeing with your father—publicly? What do you do when your dad stops being your hero? Will Mari get a chance to confront her father? If she does, will she have the courage to seize it?

In the beginning of the book, Mari feels like "people" are always watching her. What people does she mean? How does the question of privacy come up throughout the book?

Although Mari has supported her father all her life, she doesn't know much about his policies at first. What kept her ignorant to them? What do you think becomes the catalyst for her awakening to their realities?

Water comes up several times in the book. How is water important to the setting? The conflict? What does water represent for Mari?

“Sylvester's YA debut embodies the theme of our decade: to stand up and speak up for what we believe in." — Mahjabeen Syed, BOOKLIST (Starred Review)

​"This powerful novel will provoke much discussion on topics like the political machine, youth activism, and environmental justice. Highly recommended for all libraries." — SCHOOL LIBRARY JOURNAL (Starred Review)

Kirkus Reviews calls RUNNING "a timely call to stand up for your beliefs," adding that "Sylvester adeptly delves behind the scenes in political families' lives while presenting the complexity of a young woman realizing that her parents are not the heroes she always believed them to be."

The Guardian spotlights RUNNING as one of the Best Books to Understand Latinx Culture, saying it "investigates the complexities that exist within immigrant communities, rejecting the notion of the community as a monolith."