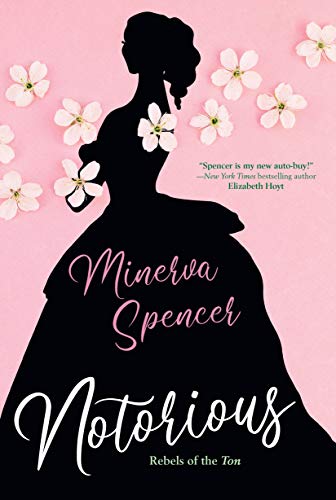 This unconventional couple won’t let the rules of Regency-era high society get in their way! Critically acclaimed author Minerva Spencer brings a rebellious spirit to Regency London with a vibrant narrative focused on how the youth of that era subvert the social expectations and mores of the day in order to carve their own paths in life. Humorous and witty, NOTORIOUS follows a forthright and unapologetically opinionated lady and the effortlessly charming rogue who they find themselves thrown together by a fluke of circumstance and into a marriage of necessity. Can the wallflower and the rake find common ground in their distaste for convention and forge a lasting union?

As a follower of Mary Wollstonecraft, heiress Drusilla Clare is full of opinions about why a woman shouldn’t marry, the least of which is that she can live comfortably independent without a man. And a few fantasies about her best friend’s brother, the rake Gabriel Marlington, surely can’t hurt. So imagine her dismay when she finds herself in the clutches of a scoundrel because of one of those fantasies, only to be rescued by Gabriel himself.  Caught in a compromising position, Drusilla is forced to accept Gabriel’s proposal and enter into an institution she has so publicly denounced even as she secretly yearns to be with him – a war between her head and her heart.

As the half-English, half-Algerian son of a Sultan, Gabriel skirts along the edges of society. Gabriel considers himself a man of honor and with his “exotic” status in society he can’t afford any missteps, thus he will stand by Priscilla and marry her to protect her reputation. His sister would never forgive him if he did not. The sharp-tongued Priscilla is not the woman he would have chosen but still something about her has him intrigued and he even finds himself challenged – in a good way -  by her unusual philosophies. And when he discovers a clandestine rival for Dru’s affection, the jealousy that flares seems very real. But the real threat to their happiness is one neither of the newlyweds sees coming. If they’re to save their future—and their very lives—they’ll need to trust in each other and their growing love.

In 1816 a woman became the property of the man she married. Even if she could tie up her wealth—as Drusilla’s lawyers (called men of business in the book) do in NOTORIOUS—there was no way to protect her person from her husband’s whims. A man had every right to beat his wife or even lock her away. Would you consider marriage under those terms?

Why does Drusilla hold Gabriel at arm’s length for so long? Is she just being difficult and insecure? Or is she pushing him away because he has the power to hurt her? Is her reaction a product of the times or is it a universal human response of self-preservation?

Drusilla’s intellectual mentor is Mary Wollstonecraft, one of Britain’s earliest feminist writers. Although the subject is only briefly raised in the book, Wollstonecraft—who was vociferously opposed to marriage—became depressed when her lover refused to marry her and attempted suicide. Do you believe Wollstonecraft’s personal behavior diminishes the value of her message? Does Drusilla’s eagerness to marry Gabriel diminish her commitment to her causes?