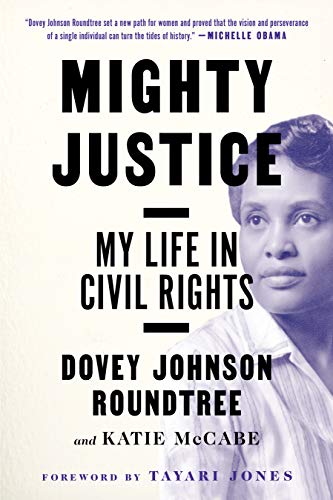 “Dovey Johnson Roundtree set a new path for women and proved that the vision and perseverance of a single individual can turn the tides of history.” —Michelle Obama

In Mighty Justice, trailblazing African American civil rights attorney Dovey Johnson Roundtree recounts her inspiring life story that speaks movingly and urgently to our racially troubled times. From the streets of Charlotte, North Carolina, to the segregated courtrooms of the nation’s capital; from the male stronghold of the army where she broke gender and color barriers to the pulpits of churches where women had waited for years for the right to minister—in all these places, Roundtree sought justice.

At a time when African American attorneys had to leave the courthouses to use the bathroom, Roundtree took on Washington’s white legal establishment and prevailed, winning a 1955 landmark bus desegregation case that would help to dismantle the practice of “separate but equal” and shatter Jim Crow laws. Later, she led the vanguard of women ordained to the ministry in the AME Church in 1961, merging her law practice with her ministry to fight for families and children being destroyed by urban violence.

Dovey Roundtree passed away in 2018 at the age of 104. Though her achievements were significant and influential, she remains largely unknown to the American public. Mighty Justice corrects the historical record.

This discussion guide was posted in partnership with Algonquin Books.

Mighty Justice begins with two stories of injustice, one suffered by Dovey’s grandmother as a girl, the other by the young Dovey herself. It ends with a transcendent vision of justice. What are the turning points in Dovey’s journey from experiencing an unjust world to envisioning a just one?

How was Dovey affected both as a child and over the course of her lifetime by the story of her grandma Rachel’s broken feet and by participating in Grandma’s nightly foot-washing ritual? What larger significance do you find in this story? How was Grandma Rachel a lifelong model of courage for Dovey?

During Dovey’s Spelman College years she had crucial experiences with two white women who were polar opposites in terms of their racial attitudes—one sabotaged Dovey’s educational aspirations by having her arrested for stealing; the other mentored her and loaned her the money to finish college. In what ways was Dovey changed by these contrasting interactions? How do you think Mae Neptune moved Dovey toward a wider vision of interracial harmony?

“The picaresque arc of her life pulses through this exquisite and essential memoir as she battles her way out of the segregated South and into some of the highest courts in the land, carving ‘a way out of no way.’” —O: The Oprah Magazine

“Trailblazing attorney Dovey Johnson Roundtree died last year at 104, but her legacy shines bright in her memoir . . . It not only covers Johnson’s triumphant journey, but it also enriches our collective memory.” —Essence

“Some life stories are too important to be relegated to dusty history books. They must be remembered, honored, shared. Dovey Johnson Roundtree lived that large and remarkable a life.” —The Associated Press

About co-author Katie McCabe
Co-author Katie McCabe is a freelance writer whose National Magazine Award–winning article on African American medical legend Vivien Thomas was the basis for the HBO film Something the Lord Made, winner of three Emmys and a Peabody Award. McCabe lives in Washington, DC. Mighty Justice is the product of her ten-year collaboration with Dovey Johnson Roundtree.