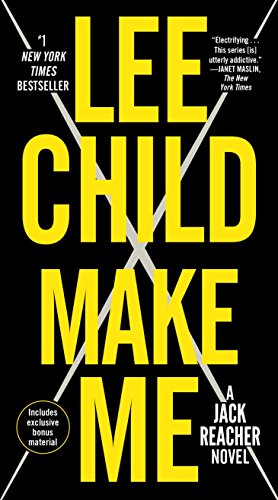 James Dover Grant CBE Born on 29 October 1954, primarily known by his pen name Lee Child, is a British author who writes thriller novels, and is best known for his Jack Reacher series. The books follow the adventures of a former American military policeman, Jack Reacher, who wanders the United States. His first novel, Killing Floor, won both the Anthony Award, and the Barry Award for Best First Novel. In January 2020, Lee Child announced that he intended to retire from writing the Jack Reacher book series, but would be handing over the reins to his younger brother Andrew. Child intended to write the next few books together with his brother before passing the series entirely over to him. Andrew Grant will write under the pen name Andrew Child. The first Jack Reacher novel they will write is titled The Sentinel and will be published in the fall of 2020.

“Why is this town called Mother’s Rest?” That’s all Reacher wants to know. But no one will tell him. It’s a tiny place hidden in a thousand square miles of wheat fields, with a railroad stop, and sullen and watchful people, and a worried woman named Michelle Chang, who mistakes him for someone else: her missing partner in a private investigation she thinks must have started small and then turned lethal.

Reacher has no particular place to go, and all the time in the world to get there, and there’s something about Chang . . . so he teams up with her and starts to ask around. He thinks: How bad can this thing be? But before long he’s plunged into a desperate race through LA, Chicago, Phoenix, and San Francisco, and through the hidden parts of the internet, up against thugs and assassins every step of the way—right back to where he started, in Mother’s Rest, where he must confront the worst nightmare he could imagine.

Walking away would have been easier. But as always, Reacher’s rule is: If you want me to stop, you’re going to have to make me.

“Either way Reacher figured he might as well find out. He had no place to go, and all the time in the world to get there, so detours cost him nothing.” What sort of detours have you taken in life and where has it led you?

What is most surprising about Mother Rest?

If someone wants to die, is it his/her choice? Should the government have a say in the matter?

“Child’s Reacher series has hit Book No. 20 with a resounding peal of wisecracking glee. Everything about it, starting with Reacher’s nose for bad news, is as strong as ever. . . . The big guy’s definitely on the upswing. The guy who writes about him is too.”—Janet Maslin, The New York Times

“Another winner . . . There’s a reason why Child is considered the best of the best in the thriller genre: He can take all these strange elements and clichés and make them compelling and original.”—Associated Press

“I’ve read all twenty of Lee Child’s novels. Maybe there’s something wrong with me. But I can’t wait for the twenty-first.”—Malcolm Gladwell, The New Yorker

“[The Reacher series] is the current gold standard in the genre. . . . In Make Me Lee Child delivers another Jack Reacher specialty; the total knockout.”—Dayton Daily News

“Child serves up wingding plots, pithy dialogue, extraordinary background on intriguing topics, and cunningly constructed suspense. But what keeps us coming back—by the millions—is the chance to walk around in the skin of that big guy in the middle of everything.”—The Oregonian

“Jack Reacher is back. . . . Readers new to this series will find this book a good starting point, and fans will be pleased to see Jack again.”—LibraryReads (Top Ten Pick)

This recommended reading and discussion guide are shared in partnership with Anderson Smith.