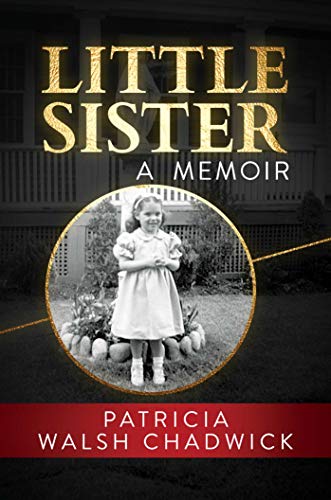 Patricia is happy to engage with your book and join your meeting via Zoom! To schedule, contact Claudia Puerta, cpuerta@ravengate.com.

Little Sister: A Memoir is Bookclubz' Book of the Month.

Imagine an 18-year-old girl who has never read a newspaper, watched television, or been to a restaurant; who has never heard of Elvis Presley or Marilyn Monroe, and who does not know how to dance – and this in the 1960’s in Massachusetts.

Patricia Walsh Chadwick grew up in a religious cult, whose leaders were Leonard Feeney, an excommunicated Catholic priest, and his spiritual cohort, Catherine Clarke. When Patricia was six years old, she was forced to live apart from her parents (members of the community) and her younger siblings, and shortly afterward, her parents were coerced into taking vows of celibacy.

The purpose of this community of 39 children and about 60 adults was to embrace a life dedicated to God and to forsake everything else – family, friendships, romance. When as a teenager, Patricia developed a romantic interest within the community, she was banished at the age of 17, leaving behind her family and being forced to make her way alone in the world without guidance, money or any access to education.

The paperback version is available for pre-order and will be released on April 28. Patricia is now writing her second book, which tells the story of her unlikely rise on Wall Street.

Resilience is a strong theme running throughout Little Sister. Is there something in Patricia’s upbringing that leads to her resilience or does it just come to her naturally? Are there times when she seems to lose her resilience? Have you experienced situations in which you were able to overcome adversity and felt empowered because of it?

Patricia’s parents and the other members of the Center were highly educated and intellectual. Why do you think they didn’t resist the draconian rules imposed on them? This story takes place in the aftermath of World War II and many of the men at the Center saw the horrors of war firsthand. Is it possible that PTSD played some role in their actions? How does the Center compare with similar situations in the recent past?

Catherine Clarke was a powerful and controlling figure in Patricia’s life. Is there a point when those roles were reversed? What was the catalyst? How did it shape Patricia’s life after that? Have you experienced a situation where you were able to influence the power structure in an important personal relationship—at home, in the workplace, among friends?

“Patricia Chadwick’s memoir is not only a fascinating story, but it is written with forgiveness and perspective.” Jeanne McWilliams Blasberg, 5 star Amazon review

“The strength of the author to overcome this lifestyle and understand the love her parents had for her, although not always evident, is inspirational. This book was extremely compelling.” - Sarah Graeve Baker, 5 star Amazon review