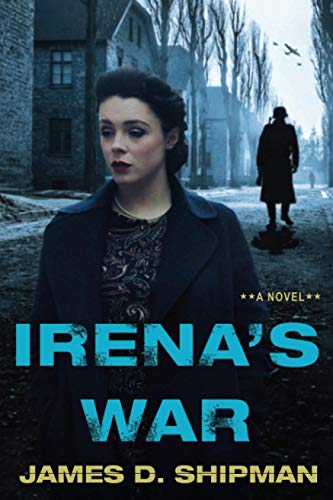 Based on the gripping true story of an unlikely Polish resistance fighter who helped save thousands of Jewish children from the Warsaw ghetto during World War II, bestselling author James D. Shipman’s Irena’s War is a heart-pounding novel of courage in action, helmed by an extraordinary and unforgettable protagonist.

September 1939: The conquering Nazis swarm through Warsaw as social worker Irena Sendler watches in dread from her apartment window. Already, the city’s poor go hungry. Irena wonders how she will continue to deliver food and supplies to those who need it most, including the forbidden Jews. The answer comes unexpectedly.

Dragged from her home in the night, Irena is brought before a Gestapo agent, Klaus Rein, who offers her a position running the city’s soup kitchens, all to maintain the illusion of order. Though loath to be working under the Germans, Irena learns there are ways to defy her new employer—including forging documents so that Jewish families receive food intended for Aryans. As Irena grows bolder, her interactions with Klaus become more fraught and perilous.

Mixing fact and ﬁction, IRENA’S WAR is based on the inspiring true story of Irena Sendler, a Polish nurse and resistance fighter who served in the Polish Underground and smuggled thousands of children out of the Warsaw Ghetto during WWII in German-occupied Poland. The children Irena Sendler rescued from the ghetto were given false identities and placed in homes, orphanages and convents. She kept the only record of their true identities written in code and sealed in jars buried beneath an apple tree in a neighbor's back yard. In 1943, Irena Sendler was arrested, tortured by the Gestapo, and imprisoned in Pawiak Prison, but she still refused to reveal the identities of any children. After the war she dug up the jars and used the notes to track down the 2,500 children she placed with adoptive families and to reunite them with remaining relatives scattered across Europe.

The Soviets and the Germans were ideological enemies on the extreme left and the extreme right. Why did they ally themselves and attack Poland?

Was it unethical/immoral for Irena to continue working in the Polish government after the Germans took over?

Irena’s actions put the lives of her fellow social workers at risk. Did she owe any duty of safety to those in her department who were not involved, and potentially unaware of her actions?