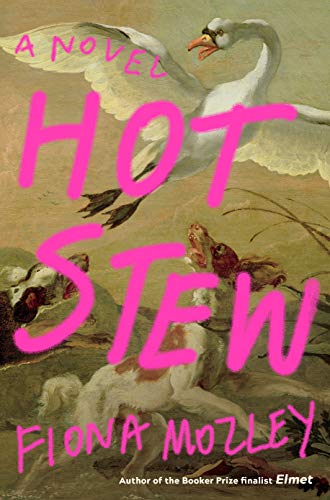 Hot Stew is Bookclubz' Book of the Month.

FROM THE AUTHOR OF THE BOOKER PRIZE FINALIST ELMET
In the middle of the bustle of London's Soho, among the theaters and sex shops and pubs, sits a building. It isn’t particularly assuming. But it’s a prime piece of real estate, and a young millionaire, Agatha Howard, wants to convert it into luxury condos as soon as she can kick out all the tenants.
The problem is, the building in question houses a brothel, and Precious and Tabitha, two of the women who live and work there, are not going to go quietly. And another problem is, just where did Agatha’s fortune come from? The fight over this piece of property also draws in the men who visit, including Robert, a one-time member of a far-right group and enforcer for Agatha’s father; Jackie, a policewoman intent on making London a safer place for all women; Bastian, a rich and dissatisfied party boy who pines for an ex-girlfriend; and a collection of vagabonds and strays who occupy the basement. In this much-anticipated follow-up to Fiona Mozley's brilliant debut, Elmet, as these characters—with surprising hidden connections and shadowy pasts—converge, the fight over the property boils over into a hot stew.
Entertaining, sharply funny, and dazzlingly accomplished, Hot Stew confronts questions about wealth and inheritance, gender and power, and the things women must do to survive in an unjust world.

This discussion guide and book of the month is shared and sponsored in partnership with Algonquin.

The novel begins from the perspective of a snail. Although set in an urban environment, there are lots of mentions of flora and fauna, from flowers and trees to birds, insects, and dogs. Why do you think the author chose to include these elements? What do they represent? How do they fit into the wider themes of the novel? What other animals and plants are in the book?

The novel references several other art forms, such as photography. What is the effect of the scene with Precious, Tabitha, and Mona Beardsley? What do you think the author is trying to say about art, creativity, and modes of representation?

Elaborating on this question, how does the character Lorenzo fit into this wider theme? He is a struggling actor who gets a job on a successful show. He doesn’t like the show and is uncomfortable with some of the scenes he is required to perform, but he needs the job. Does he make the right choice?

“Stunningly clever . . . Mozley’s vision of London, simultaneously ancient and deeply modern, is layered with mystery and packed with humanity.”

“Thrilling . . . [Hot Stew] is so precise and granular in its evocation of London that it made me thoroughly homesick while reading it. And Mozley is very good on the degree to which circumstance shapes interior life.”

“With masterful prose, through over a half-dozen point-of-view characters, [Mozley] tells a story about money and power, love and art, sex work and gentrification – and those are just some of the proteins in this complex stew . . . Mozley writes convincingly about class and gender dynamics . . . Enjoyable and impressive on every page.”

“Mozely returns with her sophomore effort in Hot Stew, a sprawling, ambitious work of social realism about Londoners whose messy lives converge in the city's storied neighborhood of Soho.”