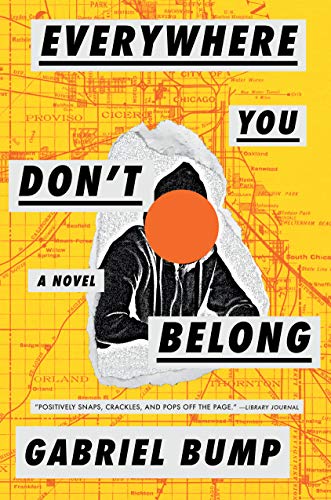 One of Buzzfeed’s Most Anticipated Books of 2020

Everywhere You Don't Belong is Bookclubz' Book of the Month.

“Spirited novel of a kid just trying to be a kid.” — The Millions
“Is there nowhere . . . a young black man can be safe?” — Chicago Tribune
“A bighearted coming-of-age.” — Buzzfeed
In this alternately witty and heartbreaking debut novel, Gabriel Bump gives us an unforgettable protagonist, Claude McKay Love. Claude isn’t dangerous or brilliant—he’s an average kid coping with abandonment, violence, riots, failed love, and societal pressures as he steers his way past the signposts of youth: childhood friendships, basketball tryouts, first love, first heartbreak, picking a college, moving away from home.
Claude just wants a place where he can fit. As a young black man born on the South Side of Chicago, he is raised by his civil rights–era grandmother, who tries to shape him into a principled actor for change; yet when riots consume his neighborhood, he hesitates to take sides, unwilling to let race define his life. He decides to escape Chicago for another place, to go to college, to find a new identity, to leave the pressure cooker of his hometown behind. But as he discovers, he cannot; there is no safe haven for a young black man in this time and place called America.
Percolating with fierceness and originality, attuned to the ironies inherent in our twenty-first-century landscape, Everywhere You Don’t Belong marks the arrival of a brilliant young talent.
“This book is astonishing. You’ll be smiling even as your heart is breaking, and you’ll tip willingly into this world Bump offers you, because what appears again and again are spectacular beams of light also called love, also called hope, also called family. Gabriel Bump has established himself as a stunning talent to be reckoned with.” —Maaza Mengiste, author of The Shadow King

Everywhere You Don’t Belong starts with Claude’s recollection of a fight between his father and another man. How does this violent act compare with other violent acts throughout the book?

There are several important supporting characters in “Bubbly and Nugget.” Which character teaches Claude the most about life?

Jonah is viewed as a savior for both Claude and South Shore. Are there people from your own life that carried similar mythic importance?

“[A] pointedly affecting debut novel . . . With deft writing and rat-a-tat, laugh-until-you-gasp-at-the-implications dialog, Bump delivers a singular sense of growing up black that will resonate with readers.” — Library Journal (starred review)
"[An] astute and touching debut . . . Bump balances his heavy subject matter with a healthy dose of humor, but the highlight is Claude, a complex, fully developed protagonist who anchors everything. Readers will be moved in following his path to young adulthood." — Publishers Weekly
“Everywhere You Don’t Belong is an excellent coming-of-age novel that will make you laugh when you least expect it.” — Shelf Awareness
“Bump’s first novel is a clipped and penetrating look at adolescent hope in the face of powerful social forces.” — Booklist
“[A] spiraling coming-of-age tale about abandonment and perseverance . . . sparks with originality . . . The ripped from the headlines plot of Everywhere You Don’t Belong draws instant interest.” — Foreword Reviews
“In Everywhere You Don’t Belong, Gabriel Bump completely, beautifully, and energetically illuminates the heretofore unrecognized lines connecting Ellison's Invisible Man to Johnson's Jesus’ Son. This is a startling, original, and hilarious book. I look forward to reading it again.” — Adam Levin, author of The Instructions
“Sometimes you open a book and you know from the very first page, this thing's alive. You know what I mean? (How often does this not happen? You open a book and it’s just a book?) Gabriel Bump's Everywhere You Don't Belong’s got a racing pulse, and a beautiful propulsion, a ton of humor, wonderful dialogue, deep characterization, and cold-eyed-truth.” — Peter Orner, author of Maggie Brown and Others

This Book of the Month is sponsored in partnership with Algonquin Books.