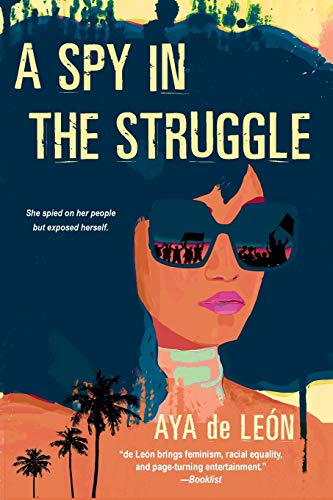 Aya De León is a writer, activist, educator, spoken word poet and author of the award-winning Justice Hustlers series. She teaches creative writing in the African American Studies Department at UC Berkeley and is an alumna of Cave Canem, VONA, and Harvard University. She is a winner of the International Latino Book Award, a three-time winner of the Independent Publisher Awards, and her extensive writing credits include Guernica, Essence,Electric Lit, Ebony, Huffington Post, VICE, Ploughshares, Woman’s Day, and Bitch magazine, among many other websites and publications. She lives in the San Francisco Bay Area and is active in the climate justice movement and the Movement for Black Lives.

A Spy in the Struggle: A Riveting Must-Read Novel of Suspense is Bookclubz' Book of the Month.

Aya de León’s action-packed, sexually-charged, politically significant novels have been described as “a rallying cry” (The Washington Post) and praised for their “poetic and savvy descriptions of women’s inner and external challenges that are reminiscent of Sister Souljah’s or Ntozake Shange’s work” (Bitch Magazine). As a spoken word poet, a UC Berkeley professor, and a woman of Puerto Rican, African-American, and West Indian heritage, de León has long married the arts with activism in her work. Her novels exist at the intersection between commercial fiction and social justice, distributing activism wrapped in sheer entertainment with sexy, high-drama plots, characters generally underrepresented in mainstream publishing, and timely themes. Now she takes on issues of climate justice, corporate corruption, and government surveillance of marginalized activists with A SPY IN THE STRUGGLE, an electrifying story about a FBI attorney who goes undercover to infiltrate a Bay Area activist group.

Praised by The Washington Post as a “passionately felt” thriller that will “have you on the edge of your seat,” A SPY IN THE STRUGGLE is a gripping tale of espionage fiction, offering a uniquely Black, feminist lens to complex social issues. When an attorney-turned-informant Yolanda Vance infiltrates a Bay Area, African-American “extremist” activist group Red, Black, and Green, she is determined to put this assignment in her win column, head back to corporate law, and regain her comfortable life. Until an unexpected romance opens her heart—and a suspicious death opens her eyes to an inconvenient truth.

Now fueled by memories of who she once was—and what once really mattered most—how can she reveal the truth without double-crossing the FBI? And how can she tell those who’ve come to trust her that she’s been spying? As the stakes escalate, and one misstep could cost her life, Yolanda will have to choose between betraying the cause of her people or invoking the wrath of the country’s most powerful law enforcement agency…

If Yolanda hadn’t made a romantic connection, how do you think the outcome of her mission would have been different?

In the end, there was a question as to whether a particular FBI agent was rogue or had been acting under orders from higher up in the Bureau. Which do you think it was? Why?

Do you think Yolanda might continue working for the FBI? Why or why not?

A Spy in the Struggle: A Riveting Must-Read Novel of Suspense

"The author of the four Justice Hustlers novels — mysteries with a heightened leftist social awareness — has produced a passionately felt stand-alone with an affecting personal story at its center."– The Washington Post

“Aya de Leon’s latest is part of a new wave of espionage fiction from authors of color and women, many of whom place emphasis on the disturbing nature of being forced to spy on one’s own.”– CrimeReads