The Path to Impersonation: An Essay by Heidi Pitlor 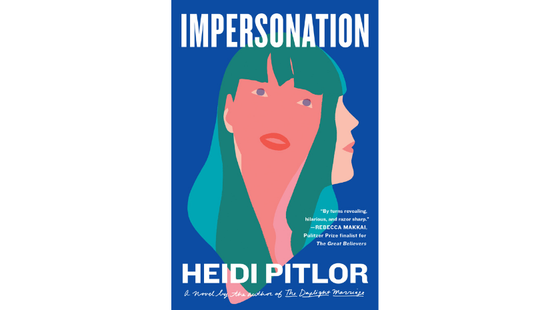 The year that I switched from full-time book editor to the more part-time work of editing the Best American Short Stories series was the same year I published my first novel and had twins. Unsurprisingly, it was a chaotic year. And things began to get pretty tight for us. Twin diapers and twin day care do not come cheap. We lived outside Boston, not the most affordable area of the country, but we wanted to stay put because my father, who was single (my mother passed away when I was young), had some concerning health issues. I found myself shuttling between a fabulous work lunch at the Four Seasons with some well-known writer (thank you, days-of-yore expense account) and a dinner of Kraft mac and cheese—alongside bottles for the babies. I would pray that the twins would sleep at the same time for more than an hour at night. Maybe, just maybe I would finally get some rest and be able to fake the wherewithal to seem awake and alert, even semi-intelligent and literary the next day, so that I could continue to earn a living. When a more financially comfortable friend would mention an upcoming eco-conscious vacation or their locally made toys, I grew frankly jealous. I would have given my left hand for a trip to Costa Rica or a room full of beautiful hand-carved playthings for my kids. I began to wonder if living according to certain ideals was possible only for the economically privileged.

The narrator of Impersonation, Allie Lang, and I have a few things in common. We are both moms of sons. Neither of us excels at housework, though we genuinely admire those who do. We both work in publishing, and with far higher-profile people. We’ve both had some financial struggles. We are both mystified by the lasting power of toxic masculinity. Allie is a ghostwriter. I have done a small amount of ghostwriting, and in a sense, my work as series editor of The Best American Short Stories is a kind of “ghost editing.”

Each year, I read every American short story published in a literary journal, select the top 120, pass these along to my guest editor, and help them choose the top 20 that will appear in the book. The process varies widely depending on the guest editor’s personality and availability. While I try not to do my initial reading with them in mind, I am always conscious of their taste throughout our collaboration. So the role of invisible or less visible participant in the workplace has been interesting to me for years.

I set out to write a book that was a little satirical, and I did have some fun at the expense of the publishing industry, as well as the American political landscapeand the world of parenting experts. Although the story and characters are all fictional, some of the emotional terrain is not. I wanted to write about a worker bee, a woman who wants to live by feminist ideals but, due to various circumstances, cannot always do so.

In the novel, Allie is thrilled when she meets her new client, Lana Breban, a renowned women’s rights lawyer. Ghostwriting for Lana means no longer working for the morally dubious—something Allie has done more often than she would have liked to in the past. Both Allie and Lana share the belief that women should have equal access to all that men do. Lana proves to be more Machiavellian than she seems initially, though, and the two become foils for each other in ways that neither could have predicted. Allie must eventually learn to assert herself in various aspects of her life: social, romantic, economic. Lana learns a few things too, but no spoilers here.

To me, Impersonation is about idealism, authenticity, and privilege. It’s about who tells what story—who truly controls which narrative, and how this affects our culture and our lives as individuals. Finally, it’s a love story, one about a mother’s profound love for her son and her concern about his future.