Excerpt from The Optimistic Decade 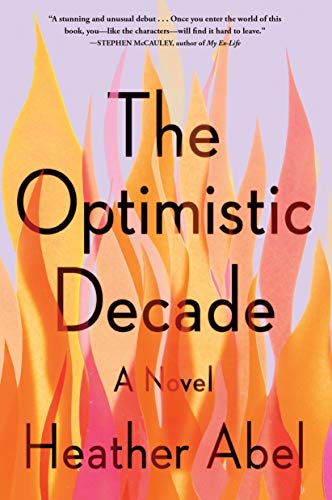 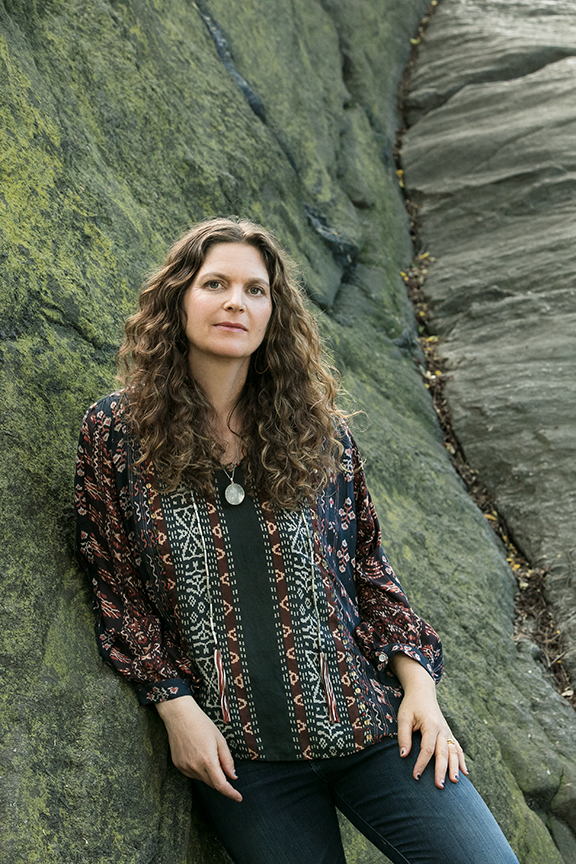 It was April 1990, not even four months into the new decade, and already Nelson Mandela had been freed and Daniel Ortega defeated and the first McDonald’s opened in the USSR, which was about to drift apart, ending the Cold War, and still, although increasingly people chose to ignore this, everything was awful when it came down to inequality and Earth destruction and generally being fucked by capitalism.

Rebecca Silver, thinking about all of this, walked through residential Berkeley to meet her father for lunch. Above her, a traffic signal swung threateningly in the woolen sky. She passed houses without front lawns, steep spillages of blackberry brambles and nasturtium, stalks of feathery fennel, ice plants with purple faces closed up against the cold, their crawling leaves like the severed feet of ducks. Cement steps led to porches with crappy furniture, painted signs announcing the names of co-ops. Staring at each house, Rebecca found herself locking eyes with a woman—a college junior or senior—on a porch swing, nearly naked in bra and pajama pants, as if the weather affected her differently. She was beautiful, mature, exhaling cigarette smoke, and yet Rebecca, graceless in hiking boots and ski hat, backpack bouncing upon her back, hoped that her own aura of importance might be visible to the woman above.

She was, after all, headed to her first reportorial meeting. Her father, Ira Silver, publisher of Our Side Now, had called yesterday. “I’ll be in Oakland for an interview with the Greyhound drivers. A total mess the way they’re being strong-armed. Let me take you to lunch. Wherever you want. We should talk about the summer.”

He’d never visited her at college, never even called, leaving all direct parental communications to her mom, while he transmitted only his newspaper, sent weekly from Santa Monica in a manila envelope, Enjoy! --Dad scrawled above the masthead, those two dashes standing in, she hoped, for a love so profound it couldn’t be written.

But now that she’d be joining his staff for the summer, he wanted to meet with her. He’d been vague as to his purpose, but she couldn’t suppress the hope that he might already have an assignment for her. Maybe there was an article that only Rebecca, having been raised knowing the way of ledes, nut grafs, and the systemic fault lines, could write. Her first byline. Already, the unlikely possibility had become the one she was counting upon.

Turning onto Telegraph, she passed a bookstore with a pyramidal display of The Satanic Verses. On a velvet cloth in the next window lay pipes with ceramic faces twisted in agony, like souls suffering Satan’s eternal flames. Beside them, a protesting handwritten sign: for decorative use only. And then she arrived at the restaurant she’d chosen because it had bad food and you shouldn’t spend money on good food when others couldn’t. Pausing at her reflection in the mirrored door, she took a moment to feel slightly disappointed in the girl with eyebrows like black moss, her angular features far from the impish femininity she admired in others.

A bell jingled her arrival; an odor of cumin greeted her. Nobody looked up. On her left was a lit refrigerated case, depressingly empty except for a bowl of tabouli salad and platter of marinated mushrooms. On her right, a small card table with bumper stickers and stacks of Our Side Now for sale. In the second row of tables sat Ira himself, reading a newspaper, not his own.

At her approach, he peered over the paper’s rim. “Sweetheart.” He hugged her briefly and fiercely. Rebecca had recently grown as tall as him, but he was broader, enlarged further by a nimbus of black-and-gray curls—rising up and out from his head and his beard, tufting behind the collar of his shirt. “Sit,” he said. “I only have an hour.”

The first twelve minutes of that hour were lost to his attempts to get the waiter to take their order, a period of time during which he found it impossible to do anything but seethe. Six more minutes were given over to the requisite exclamations about Bush: his bellicose bumblings, the Iran-Contra players in his administration, his kinder, gentler covert ops. Horrifying! I know! Idiotic! I agree! Had Rebecca read Ira’s latest editorial? “Yes,” she lied, enjoying, despite the falsehood, how proudly he looked at her.

The food arrived, as if to help them change the subject. “So talk to me,” Ira said, stabbing his fork into the weak heart of his salad. “Tell me everything.”

She could feel herself smiling back at his smile, the shared pleasure of parent-child parallelism. Despite his rush, he wanted to know all about her. And she wanted to tell him.

She described the special major she was creating—Third World Revolt and Media Studies—and the faculty she’d found to approve it.

“Jimmy,” Ira shouted. “Shit! Tell Jim I say hi. Better yet, tell Jimmy fuck you for choosing the Nation over us. He judges the Omni Prize. You know about that?” But then he stopped himself, raising a glass of water to the ceiling. “No, no, sorry. I’m listening. Go on.”

She listed, for his outrage, the sad lineup of campus political organizations. There was the Democratic Club, if you wanted to waste time being centrist. There were two environmental clubs that spent their reformative energy hiking Mount Tamalpais. But where was Ira’s coffee? Was it that hard to get a cup of coffee? Ira flagged down the waitress while Rebecca recited the clubs for people with shared identities: La Raza, Southeast Asians United . . .

“Welcome to the nineties,” Ira said loudly, interrupting her list as the coffee arrived. “Radicalism has died! Now we team up with those who look like us. They’ve given up on changing the economic structure that keeps their oppressors in power.” He sipped. “The coffee, in case you’re wondering, is tepid. But the company—you look terrific, Rebecca—the company is fantastic.”

She felt so adult, her backpack full of used books with colons in their titles that would teach her everything Ira already knew. She felt, even with her problematic hair, almost beautiful. She began to describe an essay she was working on—“Black and White and Re(a)d All Over: Representations of American Socialism and the Red Scare in the Gray Lady”—when Ira interrupted again. “Sounds terrific, pumpkin. Really punchy and astute. But listen, we need to talk about summer.”

Rebecca reached under the table and into her backpack and retrieved a pen and narrow notebook bound spirally at the top, the type he used, which she’d bought for the occasion. She set the notebook on the napkin, uncapped the pen.

He smiled at her provisions. “I’ve been thinking about that place. That place, you know . . .” He circled his hand as if he might conjure the word through physical effort. “Where David goes.”

A young boy walked into her mind, treading on the cuffs of his cords. The son of her parents’ closest friends. Once her own best friend. A pierce of pain. David David was now a sullen teenager with whom she shared nothing. A yawn. A thorn. A general disappointment. David cared little about scholastic achievement or political activism. What did he care about instead? She had no idea. He spent his summers at a back-to-the-land camp run by Rebecca’s cousin Caleb—“the visionary,” as David once called him, when he still spoke to her. She couldn’t remember the camp’s name either. Did Ira want her to write an article about it?

“That place. Caleb’s place. What’s it called?” Ira pressed his temples until he extracted the camp’s name: “Llamalo!” He pronounced it with relief, as well as an embarrassing Spanish accent. Yama. Low. “That’s it.”

But it wasn’t quite. “Actually, I think you say the initial L. Llamalo.” She pronounced the first two syllables as she would a Tibetan monk, Dalai-like. That’s how David did it.

“I told Caleb from the start it was a weird name. So, Mom and I were thinking.” He paused for coffee. “Maybe you’d like to go this summer.”

“To write about it?” Llamalo, she wrote in her notebook.

He cleared his throat. “No, hon. As a counselor. Among others of your ilk. Exploring the wilds of Colorado. Fun, huh?”

This could only be a joke. She’d never expressed interest in summer camp as a child, and even if she had, Ira wouldn’t have sent her. “Right. What did you used to say? ‘Llamalo: where Caleb teaches privileged kids to live simply, so their parents might simply live without them.’”

“Yeah, sure, we made fun of it. We did.” Ira was eating as fast as he was talking, helicoptering a lettuce leaf onto the floor. “But look, if you plan on avoiding everything we ridicule, you’ll live a very constrained life. You’re eighteen—”

“Okay, then you’ve been watching us put out this paper once a week for nearly nineteen years. Don’t you want to do something new?”

The question was so unthinkable she found herself unable to answer.

“Hello? Hello?” Ira called to the passing waitress, raising his arm and scribbling the air with his hand. Turning back to Rebecca: “Maybe we’re pushing you into the newspaper.”

She’d been the one to ask, as they both knew. “I really don’t feel pushed.”

“David’ll be there, I imagine. You’ll already know one person.”

“David? We’re not exactly close. The last time I saw him, at the potluck, the Christmas one, he didn’t even take off his headphones. He just sat on the couch drawing those heads, those oversized heads. I can’t think of the last time we talked.”

She had a memory of the kid David once was, reaching out to her in a thicket of eucalyptus. Come on, chicken. Jump. Now that boy was gone. All those years she’d spent missing him, and for what? One had to at all times remain free of the delusion that anybody was who you believed them to be.

A fly landed on a tomato in her salad. As calmly as she could, although she was trembling inside, she said, “Do you not want me to work for you?”

“Oh, honey. It’s nothing like that. It’s just, you know, we never took you anywhere. Jesus, we never even took two consecutive days off. There’s so much we didn’t do with you. No travel. No camping. I just thought you’d like it. After nineteen years, you deserve something fun. The desert! Supposed to be beautiful. Sleep under the stars. Sounds like a blast to me. But you certainly don’t have to go.”

“Fun? Who cares about fun? The whole world’s going to hell,” she said, aping Ira’s sentiment and inflections.

A passing waiter slapped the check onto the table, and Ira pulled down his glasses to study it. Rebecca imagined again the moment when she’d tell her friends about her article. “Oh, nothing really. Just a cover story for the most important paper of its kind.” She held up the relevant issue. “Oh, that!” A crowd gathered. “Just a three-thousand-word exposé on the S and L crisis and how it robbed public schools.” (What exactly was the S and L crisis? She would find out!) But this usually reliably pleasing fantasy was ruined. The crowd dispersed. What had she done to make her father want to send her away?

Ira placed a twenty on the table and borrowed her pen to write a notation on the bill, which he folded into his shirt pocket, finally looking at her. “Caleb couldn’t have built that camp without me—did you know that? He owes me. So I called him. Made up a whole song and dance about your deep and abiding love for kids.” He shook his head. “I was so sure you’d be thrilled. I really expected you to be excited. That’s why I kept it a surprise. The thing is, pumpkin, you’re already hired.”