Character Sketches and Excerpts for ONE TWO THREE 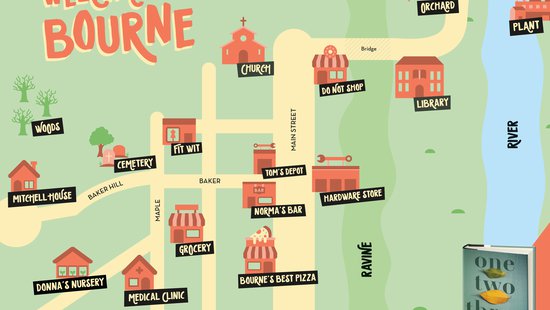 From Laurie Frankel, the New York Times bestselling author of This Is How It Always Is, a Reese's Book Club x Hello Sunshine Book Pick, comes One Two Three, a timely, topical novel about love and family that will make you laugh and cry...and laugh again.

Words Mab would use to describe her life include: quotidian, perdurable, sempiternal. She has been studying SAT words since middle school with her best friend as part of their pact to get into college and out of their too small, too isolated, too weird hometown (even if she has no idea how she’ll ever leave her sisters or her mother behind). She’s pretty sure the world out there is a lot more exciting (and terrifying) than the one she’s used to. (But maybe teenagers everywhere think their lives are boring?) What she’s not at all sure of is whether she can hack it in a world much more terrifying (and exciting) than the only one she’s ever known.

I am boring. If you asked anyone I know to describe me, they would say, She’s the normal one. I’m not short or tall, skinny or fat, buff, buzz cut, braided, or dyed. I’m not pierced, tattooed, or even mascaraed most days. I’m a boring straight white girl, but I don’t think much about race. (Maybe so. I’m a boring straight white girl so I don’t think much about race.) And my sexuality doesn’t matter since there’s no one in Bourne for me to date anyway. I am ordinary, unremarkable, average, your typical American teenager. Picture a high school girl. That’s me. That girl in your head right now? Me exactly. I could not be more normal if I tried. But here? That makes me weird. “Weird” would also have been a good adjective to describe me.

Monday prefers yellow things. Unless it is raining in which case she prefers green things. Strongly prefers. She prefers people to speak literally and exactly, rules to be clear and followed, risks to be avoided, truth to be told. When she plays Truth or Dare (and a Lie) with her sisters, she always picks truth. She is the town librarian (even though she is only sixteen-years-old and even though the library is not at the library but in her house), and it is a good thing she is because she knows what book you need better than you do.

Mr. Beechman sings my name when I walk into class. “Monday, Monday,” he sings, “so good to me.” This is not because I am good to him but because my name shares that of a song by an old band called the Mamas and the Papas. Some mornings he sings, “Monday, Monday, can’t trust that day,” which is the second verse of the song but which is not accurate because I am very trustworthy. I know a lot of facts. I relate them responsibly and appropriately. I never lie. I am also not a day.

Mirabel is smarter than her sisters, smarter than her mother, smarter than anyone she knows. (She’s smarter than her author, in fact.) But she’s still a sixteen-year-old girl in a very small town. She uses an app on her tablet to speak and a wheelchair she operates with the one hand and arm she can control. Instead of going to high school, she does the books for the only bar in town as math homework, studies astrophysics, biochemistry, and vertical farming online, and takes care of her mother and sisters (just as much as they take care of her).

With my perfect right hand, I can type something in, and my Voice reads it aloud. Or, because typing is slow, I can speak with symbols…It’s smart, predictive, so it’s learned my speech patterns, which words most frequently follow which, how teenage girls talk, how I am different from most teenage girls. Here I am not deviant from the norm. In Bourne, we know there is no norm. But also in fact, for Bourne, I’m pretty normal. There’s no need to fight to mainstream me at school because I am the mainstream, and school is set up to accommodate my needs. Well, some of my needs. Bourne High is equipped to keep students like me alive. But alive is not the same as educated. Let’s just say I’ve read ahead. Nora says keeping up with me intellectually would be a challenge for any high school, most colleges, lots of postdocs, so no one is to blame for Bourne High’s insufficient intellectual rigor. I wouldn’t believe her (as far as proof you’re a genius goes, “My mom thinks so” isn’t especially convincing) except that it’s a rare thing for which Nora doesn’t think someone’s to blame. Sometimes I go in anyway. Mostly I homeschool myself. But not at home. I can’t be home alone all day. So mostly I homeschool myself at Nora’s work, a mix of independent studies and online courses, theories I research, ideas I wonder about, rabbit holes I wander down.