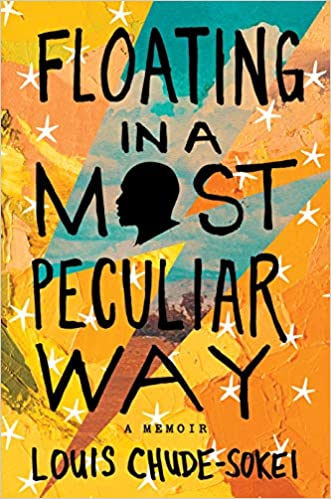 Louise Chude-Sokei's memoir is the astonishing journey of a bright, utterly displaced boy, from the short-lived African nation of Biafra, to Jamaica, to the harshest streets of Los Angeles—a searing memoir that adds fascinating depth to the coming-to-America story.

What drove you to write this memoir and share your story?

Due to my family’s experiences of multiple migrations, I was surrounded by stories worth telling, stories that didn’t adhere to all the clichés of immigrant or Black writing. But I avoided “telling my story” for years, because what’s more cliché than that? I blame my mother: she knew she had a story that covered so much ground. She also knew—particularly as the end of her life approached—that I should be the one to tell her stories, because they were what made me and my work possible.

There are many memorable women in your book—what were some of the challenges of writing about them?

And there were/are so many more than the book could contain. The challenge was not just to distill them and their differences while maintaining their complexity as individuals. I also wanted to tell the story of how easily we male children ignore those who actually guide and shape our worlds because we are always looking to fill a gap that we mistakenly assume can only be filled by men. It is a mistake that boys make, and men maintain.

Your mother was a nurse from Jamaica who married an African national hero in the short-lived nation of Biafra. What did Biafra mean to her? What does it mean to you today?

The book, of course, answers those questions—at least the first one. For my mother Biafra was both the culmination of African colonial freedom struggles, and the failure of those freedoms in the wake of independence. But for a moment it was that space between freedom and failure, which is the space of possibility. Such things are always brief, and we often pay a terrible price for them. For me, Biafra was the specific engine that sent many of my parents’ generation into Diaspora—to America, in our case, only to have their children begin quietly in their confusion help remake Black America.

The stories in the book about education aren’t just about books and schooling, but yards and streets and alleys and hallways and politics and the growth of the imagination. They are also about learning how race and immigration work in all those spaces. Because books and music and ideas were what kept me afloat and in one piece, it made sense to explore my education and the very important teachers who influenced me when no one else could.

What were some of the documents or people you referenced when writing this memoir?

As a scholar so much of my professional research has been about colonialism and race—and my family experience is directly involved in all of that, from West Africa to the Caribbean, the UK and in America. In addition, I’ve spent years asking questions of friends, strangers, and family, including the late great Biafra head of state, Odumegwu Ojukwu; but also, ex-soldiers and nurses and survivors of war and migration. For a lot of folks in Nigeria, just knowing who my father was made them want to tell me stories; and as someone who has always put himself in unusual social situations here and abroad, I’ve been privy to insights and perspectives that may escape others but that feed my own work.

Your book makes it clear that your mom was your richest source. Tell us more…

As depicted in the book, my mother kept and carried almost everything and over great distances. One of the jokes in my family was that she was a refugee with tons of luggage! For me this meant she was an archivist—of Biafra, of colonial Jamaica, of post-War England, and eventually of America. Photos, pamphlets, news clippings, magazines, cassette tapes, books, her own musings—so much stuff that as I grew up it became hard to navigate it all in our home. But before it became intolerable to me it was my world, my childhood exposure to serious research but also to this thing called “Diaspora.”

She was always reluctant to talk about the details of her life and the conditions of our arrival; but she allowed me free rein to dig into and pour through all the materials in the house, under couches and beds, in closets; and when she was finally able and willing to talk about these things and answer questions, she was talking to someone who knew what and how to ask.

Biafra and Nigeria have made global headlines recently. What is it like seeing a place you are connected to and have written about in the news? Have your perceptions or feelings towards Nigeria changed?

Well, Nigeria is always in my life and mind due to family obligations and commitments; the same with Jamaica. Plus, I’m always in touch with people, reading news and consuming culture, and sadly there is often some crisis. From Biafra to the present moment there have been endless crises. So much of what defines the Nigerian psyche is an accommodation to crisis (my friends and I joke that the problem with Nigeria is that its people survive the impossible too often).

The recent violence committed by the police and the government and the protests against it is not “news” to me generally speaking. However, there is definitely a new generation in Nigeria that is less willing to accept a certain kind of treatment. It’s a generation more attuned to its “diaspora,” and the anti-Black violence here in America has had some impact.

But my perceptions and feelings towards the country change all the time, depending on how long it’s been since I’ve been there.

You lived through the LA Riots. How do you think those compare to the current civil unrest and BLM protests? Any lessons from those protests that we should apply today?

I was writing the LA Riots section of the book just as things began to kick off in the wake of the murder of George Floyd. It reminded me, as someone who has been trying in his work to reframe and reshape thinking about race in America away from the dominant Black/white narrative, that just when one thinks we can assert some complexity and diversity in talking about Black lives, then that possibility gets shut down by a spectacular Black death.

For example, during the LA Riots/Revolution I was on the cusp of writing my dissertation, which was about the differences and tensions between Black immigrants and African Americans in literature. But then BOOM: Rodney King. The Black/white narrative always reminds us of its dominance. Violence has a way of simplifying things, however falsely.

You’ve lived and experienced firsthand the African Diaspora—what is it like being an academic/expert in a field you’re so closely tied to? Why did you pursue a career in this field?

I never actually expected to pursue a career in this field. I wanted to write novels and make music or work sound. But those are precarious professions and so for a while it seemed best to hang out in school for longer, play in mediocre bands, DJ in shifty clubs, and write bad novels until something clicked.

What clicked was that I started to read more African, Caribbean, and African American literature as well as literature from immigrants and former colonies. Despite learning much from these books, I thought most of the critical work about them was self-righteous and mediocre. I thought, arrogantly, I could do better partly because of my “firsthand” experience. But I never wanted to be a professor, that’s for sure. It happened entirely by accident.

There’s a strong connection to music, particularly David Bowie, throughout the book. If you could create a playlist for readers to listen to as they read the book, what are some of the artists and songs you would include?

Well, the chapter titles are meant to act as a sort of Bowie playlist, so I’d start there. Much of the book hinges on me having heard a Bowie song in a refugee camp in West Africa as a child, according to family lore; and I spent much of my childhood in Jamaica and America trying to find it!

To supplement the chapter titles, I’d add what was also being played around me by my family: Byron Lee and The Dragonaires, Bob Marley, Judy Mowatt, The Mighty Sparrow, Lord Kitchener, The Oriental Brothers, IK Dairo and the Blue Spots. And, of course, for my angst-ridden teenage and college years, Prince, Morrissey, 4AD Records, and David Sylvian.

You started life in Africa and moved to Jamaica before coming to the U.S., then grew up on the tough streets of L.A. Do you consider yourself American? What about African-American?

I grew up on lots of streets in LA, some tough, some not so tough, some delusional. But my stock answer to the question of what I consider myself is this: half Nigerian, half Jamaican, and half African American. Bad math, but absolutely accurate.